Ok so here's the situation with my 04 GV AC

Joined Feb 8, 2009
·
719 Posts
As some of you know I bought my 04 GV a couple months ago while it was still winter time and of course the previous owner said the AC system just needs a recharge when it gets warmer. Now it's starting to warm up, to start off with I bought one of those manifold gauges that measure lo and hi side pressure, but a cheap one from Amazon (more on that later). When I hooked up the gauges and took a pressure measurement without the car running, there was no pressure whatsover, so I'm assuming there was nothing in the system.

Furthermore, when I tried to run it to take a pressure reading while running, AC compressor would not kick in, tested the compressor relay in the fuse box it was fine. So I tried to charge it with a can of R134a to see if the compressor would kick in, no luck, my line and the connection at the lo side was freezing over, the system not drawing in any refrigerant. So I jumped the compressor by shorting the relay at the fuse box while charging with refrigerant so now it started drawing in refrigerant. My initial charge was 335 grams, I was doing by weight, as the specs for the 04 GV said minimum 450 g and max 550. Drove it around and although cool in the shade, was not cool enough under the sun on a warm 80 deg F day. My pressures seemed low as well, both lo and hi sides equalized at 100 psi (when I just shut car off) but went down to 80 psi when it sat overnight, don't know if that's natural with the drop in ambient temp or if I have a leak. When it was running and my manifold gauge was working, I saw the compressor cycle at 30 psi on the lo side and 150 psi on the hi side, those readings seemed a little low which is why I asked Max for the temp/pressure chart from another thread, mind you this was all in the shade in the garage.

So today I took it for a test drive on an 80 deg F day, but the compressor would not cycle, it just kept running and although it started blowing cool air earlier when it was in the mid-60s in the morning, as the day got warmer it was blowing warmer air out the vents at least 60 deg F, maybe even warmer, again with the compressor not cycling (meaning it kept running but would not cycle or shut off), plus there was hissing through my vents so I'm guessing there's not enough refrigerant or again if I have a leak. So I went back home and this time charged with another can, added another 192 grams to the original 335 g from the first charge, so now I'm up to 527 grams, just 23 g below the max of 550 g. Air blowing through vents is nice and cool or even cold now, measuring just about or a little below 48 deg F exit temp through the vents. This time compressor is cycling on and off, would kick in about 15 seconds, shut off for 15 seconds, then kick in for 15 seconds, when I set the fan speed exactly down the middle. The cycling would be even shorter when fan is set to low. When I set fan all the way to high, compressor will not stop, just keeps running, so I'm assuming it just keeps calling for more refrigerant. So is that cycling at those fan speeds considered normal? I was going to use my 04 XL7's AC as a basis of comparison but it's not blowing as cold as my newly charged GV, and not cycling as much as my GV either, I think my AC compressor is going out on my XL7 but that's another story.
,
Oh and back to that cheap manifold gauge. When I fully charged it up I could not measure pressure on high and lo side because the needles were stuck at the last readings when I used it to charge the first time, so I tried to recalibrate them back to zero, but to make a long story short, they just got messed up, so I'll either ask to send for a replacement or a refund, but it was a cheap set from Amazon.

Anyhow because I don't have a working set of manifold gauges anymore, I was depending on one of those cheap gauges that come with the can while I was charging the second time to add more refrigerant, and just taking the weight of the refrigerant can with a small precise scale I had so I have a pretty good idea of how much refrigerant I dispensed (probably a more accurate method than the cheap gauge), which again was 527 grams, again max is 550 g according to the label under the hood. I'll just wait a few days to see if I lose any cooling, or system starts hissing again calling for refrigerant, then I know I have a leak. Until then, if someone can give me an idea of what is considered normal cycling of the compressor, I would appreciate it.

Note too that you should also have a sight glass which to observe in determining a proper refrigerant charge, in combination with gauge pressure observation. You need to have the system evaluated by personnel who know refrigeration systems and testing procedures. There are too many ins and outs to the operation to sit here and attempt to educate you to the level required.

Lastly, you have a significant leak to track down and correct, based on the scenario you provided.

99 Tracker, 5 door, 2L, 4x4
Joined Oct 6, 2007
·
10,429 Posts
You should be aware that if the system was truly discharged, it should be evacuated and vacuumed to eliminate any air/moisture, before injecting any refrigeration..

aquanaut20 said:
You should be aware that if the system was truly discharged, it should be evacuated and vacuumed to eliminate any air/moisture, before injecting any refrigeration..
Click to expand...

That would have been ideal but I was so focused on whether or not the compressor was bad at the time because it wasn't kicking in with no pressure in the lines, so I wanted to see if it would kick in with some amount of refrigerant. I'll monitor the situation to see if I lose any cooling in the coming days or weeks. Thanks guys!

99 Tracker, 5 door, 2L, 4x4
Joined Oct 6, 2007
·
10,429 Posts
For future reference, you do not need to waste refrigerant to check the system, just insert some air to pressurize the system, it will not cool but it will verify the operation..

Next would be to vacuum the system down, preferably to <500 microns..

aquanaut20 said:
just insert some air to pressurize the system.
Click to expand...

I wouldn't recommend ever introducing (your typical moisture laden) shop air into an A/C system. An inert gas such as Argon or Nitrogen in a tightly controlled procedure, but that's about it.

Besides, the pressure add that you are suggesting will only accomplish one thing in this scenario, and that is to close the low pressure switch (already by-passed) in this current case to energize / test the compressor.

And FWIW, you should strive for a better than a 500 micron evacuation.

Why hitting 500 microns is not enough! – measureQuick

99 Tracker, 5 door, 2L, 4x4
Joined Oct 6, 2007
·
10,429 Posts
You assumption of introducing moisture laden air is redundant as it would already have that if the system has been open to the atmosphere (no refrigerant). bypassing the low pressure switch does not test its operation, so you would not have fully tested the stems components.. Further we were discussing a possible process where wasting refrigerant (which would incur a cost to recover) or using an inert gas which may not be available to the DIY..
You would be changing the dryer and evacuating vacuuming (removing moisture), and if you read the previous it said < (less than), keep in mind most A/C shops vacuum for less than 15 min, and do not use a micron gauge.. and bet they do not even get close...

Why are you always so critical of other opinions...

aquanaut20 said:
bypassing the low pressure switch does not test its operation, so you would not have fully tested the stems components

Why are you always so critical of other opinions...
Click to expand...

On pressure testing...precisely my point! Your air pressure add would only close / test the LP switch compressor coil circuit (as I addressed earlier) but test nothing else!

Critical of other opinions? Only when they are offered in error by others AND there are optional (correct) testing procedures of which to offer.

And no, one should NEVER intentionally add air / moisture to a closed refrigerant system. Period.

Joined Feb 5, 2018
·
507 Posts
Regarding using compressed air in the system, there's also that pesky habit of compressed oxygen in that air and oil having a tendency to spontaneously combust.

Sent from my Moto E (4) Plus using Tapatalk 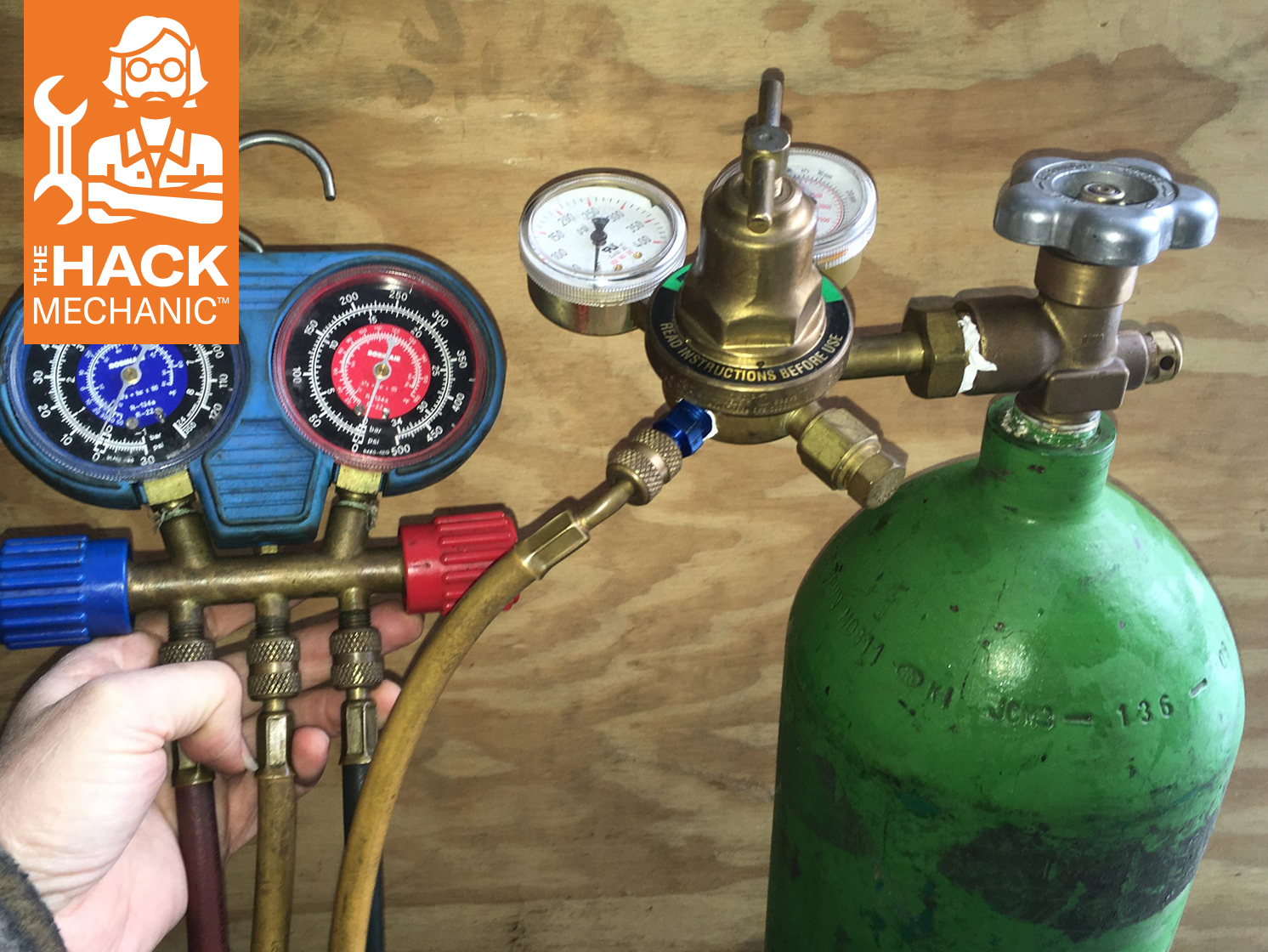 Rob Siegel says those “A/C recharge $79.95” signs you see at service stations are false advertising, and he explains how to test for the problem and fix it yourself.

Max said:
A timely submission to our little discussion...
Click to expand...